Are you fascinated by the thought of a judicial caning? Is the idea of a punishment in which you cede complete control something that draws you? Do you crave a level of severity you’ve not previously experienced? Then perhaps a judicial punishment at the hands of Miss Brown is for you.

Imagine the scene: you arrive at Miss Brown’s premises at the appointed hour having previously agreed in telephone and email discussions what is to transpire. You know there will be no safe word; once the punishment is started it will continue to its conclusion. There will be no discussion, no negotiation, no mercy.

The door opens and you are admitted. Immediately, there in the hallway, you are curtly instructed to strip naked. You are asked whether you need to use the toilet and are accompanied to do so. The complete lack of privacy begins to give you some idea of how different this is to a normal session. Once finished you are led back into the hall, cuffed and left to stand outside the punishment room until the time for the execution of sentence arrives. You hear no sounds from within. The silence is broken only by the sound of your heart beating and the throbbing of blood in your temples. It seems to last a lifetime. You earnestly want to get it over with and yet you’re already beginning to wonder what you’ve got yourself into.

Suddenly the door opens and Miss Brown gestures for you to enter. No words are spoken. You are led to the punishment bench and silently directed to mount it. You are strapped into position at your calves, thighs, waist and wrists. You cannot move. There is no way to protect your bottom from what is to follow. Miss Brown speaks only to announce your sentence. 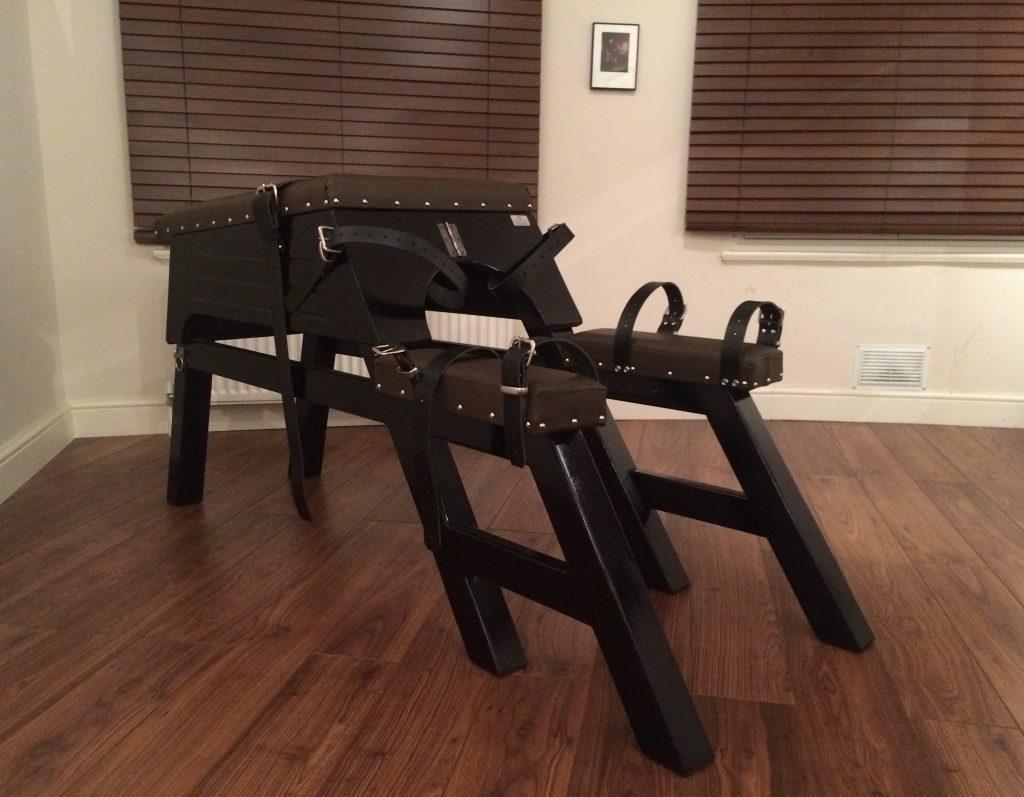 In my case I had been sent by my wife for punishment. “Your sentence is 36 strokes of the judicial punishment cane.” I heard the rattle as the cane was extracted from its resting place. A low humming whistle as Miss Brown slashed it through the air in preparation confirmed that this was, indeed, a formidably heavy cane. This was confirmed when it tapped me two or three times before being withdrawn, only to be lashed into my waiting buttocks with all the strength Miss Brown could muster.

“One”, she intoned coldly.

I am accustomed to severe canings but this was something else again. I could not believe the pain. My breath seemed to be knocked out of my body. I began to pant, desperately trying to regain control of my breathing. My mind was racing. “How am I going to get through this? How can I stop it? Perhaps Miss Brown will take mercy on me.” As if in answer, the cane lashed in again, seemingly penetrating my flesh to the bone and sending shock waves up my body.

And so it went on. I quickly lost count, praying that I was further through my ordeal than was the case. Each time I entertained this thought I was brought back to earth by Miss Brown’s announcement of that stroke’s number.

And so it went on. I had thought in advance that so many strokes with a heavy cane might lead to a relieving numbness but it was not to be. Such is Miss Brown’s skill and accuracy that she is able to vary her aiming points. Every time I thought that successive strokes on the same spot were dulling the sharpness of the pain, the assault switched to a new part of the target.

Miss Brown caned me with a steady rhythm, systematically welting my cheeks from their tops to the crease where thigh joins bottom. I have no idea how long I was over that bench or what the interval between strokes was. For however long it lasted, nothing else existed in the world except my bottom, the cane, Miss Brown’s voice tracking the progress of my sentence and my gasping attempts to control my breathing.

And then, suddenly, it was over. I lay spent on the punishment bench, soaked with sweat and breathing heavily. My buttocks felt as though they had been simultaneously roasted and shredded. There was blood too, seeping from the hard corrugations raised by the cane. Miss Brown cleaned up my bottom before unfastening my bonds. Now in her caring post-punishment persona she helped me to dismount. I was light headed and my legs would not initially support my weight. I had to be helped to the sofa where I sat oblivious to the discomfort that might otherwise have led me to remain standing.

I was afforded as much time as I needed to recover while being plied with hot sweet tea and sugary snacks. Eventually I was sufficiently restored to leave, now somewhere on cloud nine. My wounds took a month or more to heal and there were still traces of the cane some two months later.

Would I do it again? I’m not sure. Be under no illusion that it’s a challenging way to session. Certainly, you should not contemplate such a session on a first meeting with anyone. If you choose to try it is important to ensure that you are in experienced hands. At no point in what was, by any measure, an exacting experience, did I feel unsafe. I was confident that Miss Brown knew what she was doing, could read my reactions and had my welfare at heart.